Learn what your genetics can tell you about yourself with the DNA Talent and Personality Test More info
; 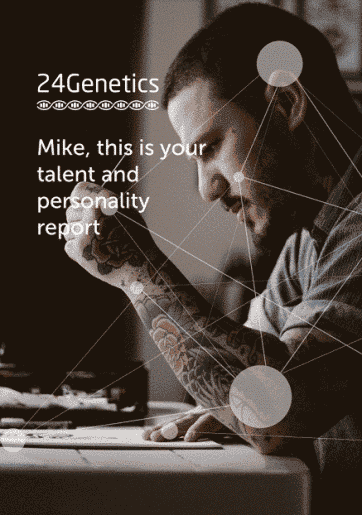 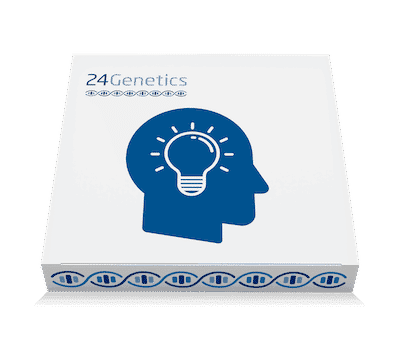 A multitude of factors determines the different talents and personalities of people.

The experiences that accompany us from birth and all kinds of environmental factors have forged our personality.

Discover the genetic heritage of your personality with the DNA Talent and Personality test.

In this report, we apply prestigious genetic studies to your genetic information and explain the conclusions. The information extracted from these studies should not be taken as predestination but as a predisposition that may or may not resemble reality depending on the other factors, which are usually the most important in the case of personality.

These reports may change over time, according to the progress of scientific research in the field of genetics. New mutations are continuously being discovered, and we are learning more about the mutations we analyse today. At 24Genetics, we make a great effort to apply consolidated scientific findings to our reports regularly. 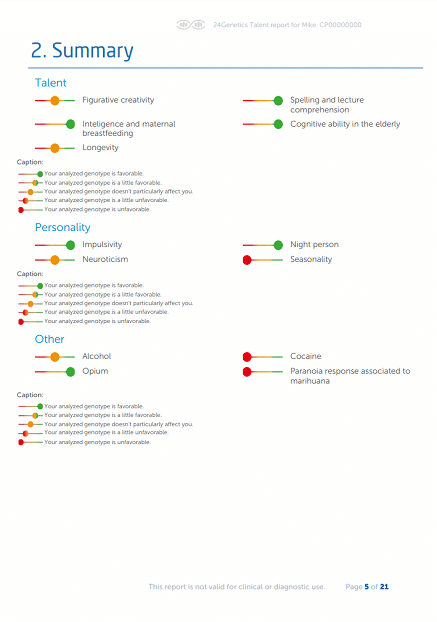 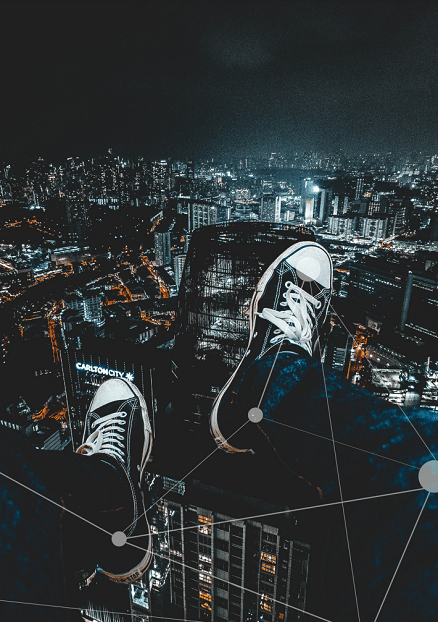 What are talent and personality?

According to some dictionaries, talent is defined as intelligence (ability to understand or comprehend) or as aptitude (ability to operate competently in a specific activity), in its first meaning.

And personality is defined as the individual difference that constitutes each person and distinguishes them from others.

Talent and personality concepts are less tangible than those we analyse in the rest of our reports, which deal with eminently physical characteristics. Possibly because of this, many people ask questions such as: are genetics and personality related? Is there a genetic basis for personality? Do tests for talent have scientific backing?

A multitude of factors influences the different talents and personalities of human beings.

Our experiences from our earliest childhood and the so-called environmental factors – which are all those agents in our environment with which we interact on a day-to-day basis on an intellectual, emotional or social level – have shaped our personality and continue to modify and qualify it until the moment of our death.

But all this does not mean that there is no genetic component in certain personality traits, some of which can lead to what we usually call talent. For example, certain predispositions are marked in the genes that we analyse in our DNA talent and personality test, such as impulsivity, nocturnality, seasonality, neurosis, or even the tendency to suffer from dependence on certain substances. All of these can be directly related to personality. But we also analyse traits such as figurative creativity, spelling and reading comprehension, which can also be associated with developing talent in certain disciplines.

Did you know, for example, that breastfeeding can influence cognitive development?

Almost all of us have heard of the importance of breastfeeding in the physical development of babies, providing them with antibodies, which give them extra protection against various diseases and infections, as opposed to prepared milk, apart from the advantages it also has for the mother on a physical, hormonal and emotional level. But breast milk contains essential hormones, enzymes and antibodies, which in addition to the physical impact mentioned above, also have an influence, in combination with certain genetic variants, on better cognitive development. Recent scientific studies link breastfeeding to IQ development. It has been observed that infants with certain types of genetic polymorphisms are particularly affected in their IQ by the fact that they have been breastfed.

On the other hand, cognitive abilities are also often affected by age. We assume that, as we get older, our memory will lose capacity, especially in short-term memory; that our ability to understand new concepts will diminish; that we will be less able to make decisions of all kinds; and a host of other signs of involution in our brain capacity. However, it is not the same for everyone. We are aware of this because, in our environment, we all know elderly people with their physical and mental capacities almost intact and others who, little by little, are evolving towards total dependence. Here, too, a genetic factor plays a role. The COMT gene encodes an enzyme that degrades dopamine in the prefrontal cortex and whose differences from one person to another are related to cognitive performance in senescence.

In any case, as we always say at 24Genetics, genetics marks our natural predispositions.

Still, these are influenced to a greater or lesser degree by environmental and personal factors or habits that can balance or, on the contrary, exacerbate these natural predispositions. Thus, in the case of health, it may be evident that a person with a genetic predisposition to, for example, suffer from cardiovascular disease will probably not develop it if they live in a pollution-free environment, eat a healthy diet, do regular sport, do not smoke and avoid stress and anxiety. And the same is true in the opposite direction.

When it comes to personality and talent tests, environmental factors may have an even greater influence. Thus, we can indeed say that, despite the genetic basis of personality, it depends to a large extent on ourselves and the traits that we, or our educators, are interested in developing from an early age.

We have seen how genetics and personality are related. Our DNA talent and personality test offers you information, contrasted by countless studies validated internationally by the scientific community, which indicates your genetic predispositions in this area. 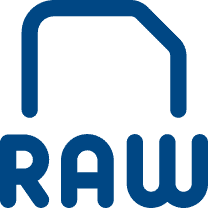 Do you already have another genetic test?

If you have already taken a genetic test from 24Genetics, 23andme, Ancestry.com or another company, we can create your 24Genetics Talent and Personality report with your raw data. Other companies cannot do it for you. Buy it now in our shop, and you will soon have your personalized report.

HOW IS A 24GENETICS TEST CARRIED OUT?

It is much easier than you think. First, we will send you a DNA kit with a booklet describing in detail the steps you need to follow to collect a sample of your saliva. You also have the instructions in a simple video by clicking here. Afterwards, simply send the sample back to us in the stamped envelope included in your pack or schedule a home collection. Next, we will extract the genetic data contained in your DNA sample in our specialised laboratory. This is done by a process called sequencing. Finally, we will apply the algorithm developed exclusively by 24Genetics to your genetic data, with which we will obtain your personalized report.

CAN I DO THIS TEST IN MY COUNTRY?

Of course, you can. We send our DNA kits anywhere in the world. We have multiple distribution centres in several countries, so we will send you your kit from the one closest to your home to deliver as fast as possible.

DOES IT ALL DEPEND ON MY DNA?

ARE ALL GENETIC TESTS OF THE SAME QUALITY?

Many genetic tests can only give you a small amount of information. At 24Genetics, we analyse more than 700,000 genetic markers. In addition, we rely on state-of-the-art genetic analysis. This and the algorithm we apply, developed entirely by 24Genetics and which includes thousands of reports backed by the international scientific community, allow us to say that our reports meet the highest quality standards. Due to the variety of reports and the quality of the information provided, our genetic test is possibly the most complete on the market.

WHY IS THIS THE BEST GENETIC TEST ON TALENT AND PERSONALITY ON THE MARKET?

Because of the amount of information we are able to offer you and the quality of this information. In this link, we explain these two reasons and the other aspects that you should consider to choose the best genetic test on the market.

WHAT IS THISTEST BASED ON?

Our tests are based on countless genetic studies recognised and accepted by the scientific community. Furthermore, relevant scientific studies are published in specific databases by international scientific institutions and organisations, as long as there is a certain level of consensus. Our DNA analysis algorithm, developed entirely by 24Genetics, includes thousands of these proven studies. In addition, it is regularly updated with new publications on genetics that affect our areas of interest.

WHAT WILL I GET IN PARTICULAR WHEN I TAKE THIS TEST?

You will receive a comprehensive and personalized report by email with detailed information about your genetic propensities. In addition, if you request it, we will also send you the raw data file containing your genetic map. You can request it when you place your order, or at any time you wish. And remember that you will receive both information in the email address you provided when you registered your kit.

HOW DO I KEEP MY REPORT UP TO DATE?

Every time we design a new feature, we run a variety of tests before making it public. But don’t worry. Once it has been validated and included in our report, we will contact you to notify you.

WHO CAN TAKE THIS TEST?

This test is aimed at anyone, regardless of age, who wants to know the information provided by their own genetics.

WHY AREN'T MORE TRAITS ANALYSED IN THIS REPORT?

Behavioural and cognitive trait genetics is a relatively recent discipline that has not yet been explored in great depth. Therefore, at 24Genetics, we decided to select only those traits for which there was robust scientific support.

CAN I BE DIAGNOSED WITH A MENTAL ILLNESS WITH THIS TALENT AND PERSONALITY TEST?

No, this test is not intended for diagnostic purposes and has no clinical validity.

These languages have been translated automatically